Is this a Polychaete worm?

This animal is found in the checktrays in one of the shrimp farm. The photograph is sent by a farmer to identify the animal. The Average Body Weight of the shrimp in the farm was around 3.5g. Does shrimp at that stage consume them??

Is it good or bad to have such worms in the shrimp pond??

The image quality of the photograph is quite poor with low resolution and taken too far away from the worm.

Looks to me like it’s a stinging bristle worm... I cannot, however, confirm because the quality of the photograph is poor.

Terrible photography ... the net (background) is the one in focus leaving the worm (subject) blurry because it is out of focus.

I’ve been stung by one like that when I accidentally touched it while I was retrieving my fishing hook that got stuck (or got snagged) in the limestone rocks during low tide.

I was fishing for juvenile one-spot snapper (Lutjanus Johnii) to raise in a fish RAS tank that I designed at the back of a black tiger prawn hatchery that was under my watch.

Just experimenting and playing around with RAS out of curiosity, as usual.

My fingers looked like a face of a dog heavily impaled by porcupine quills.

Only those from the hairy bristle worm are finer. 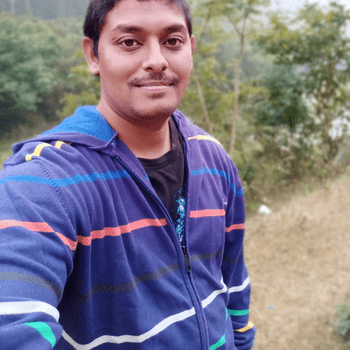 Thank you for your insights.

Do you have any known reports on occurences of polychaete worms in Shrimp ponds?

Do you have any reports on consumption of Polychaete worms by juvenile shrimps?

Are there any control measures to eradicate them during shrimp culture or at Pond preparation??

These bristle worms might have entered the shrimp ponds during filling as planktonic larvae (or nectochaetes) about 150 microns -380 microns in size.

Polychaetes undergo mass swarming during spawning depending on the season and lunar cycle. You can coordinate with the research institutions and universities that study the biology of bristle worms in your locality.

You just avoid pumping in surface coastal water where the bristle worm larvae are abundant.

Or install filters down to the finest microns possible that are smaller than the average size of nectochaetes.

This is not a problem in shrimp farms using borehole water to fill in the shrimp ponds.

Bristle worms are benthic scavengers. They will get attracted by the smell of shrimp feeds. They don’t target live shrimp but will try to get into dead shrimp to nibble and their stings are not as venomous as the fireworms.

If the bristle worm has grown into the small size that is shown in the photograph from the larval stage simply means the shrimp are not eating it … Just call it cohabitation.

Seeing one to two in the feeding tray doesn’t mean there is a lot in the shrimp pond.

Just tell the shrimp farmer to remove those that they encounter and that’s it.

I have encountered Sea Hare (Dolabella auricularia, Lightfoot 1786) infestation in one of the shrimp ponds in Zambales, the Philippines.

We just removed those that we encountered including the mass of eggs they left behind. The egg mass looked like spaghetti. The shrimp pond caretakers ate some of these.

After removing about 30 sea hares during a daily incidental encounter, they were all gone in after a week of encounter-scooping.

So to answer your question and I quote: “Is this a polychaete worm?”

The answer is yes … but it got bristles unlike those naked polychaetes in the family Nereididae.

Thank you for your eloborate insights. Every time I bring a question to the discussion, I am confident that I will get an answer. That's why I like this forum.

You are welcome and thank you for the kind words.

Not too many people in this world know how to express and show thankfulness in the manner that you did.