Study on shrimp broodstock diets Hello everyone, My name is Juan, I study at Hong Kong Polytechnic University . With my project group we are doing a study on shrimp broodstock diets, especially Polychaetes worms used as live feeds. Whether you work, own a hatchery or just know the subject, I would be very gratefuly if you would take a few minutes to helps us by answering this questionnaire. If you wish, we will send you our final report following our study. Thanking you in advance,https://docs.google.com/forms/d/e/1FAIpQLSdXM6kKNQGJMR8eEWd9KorTavuAGg-KmxHfPed6k6VxuO-eJA/viewform?usp=pp_url 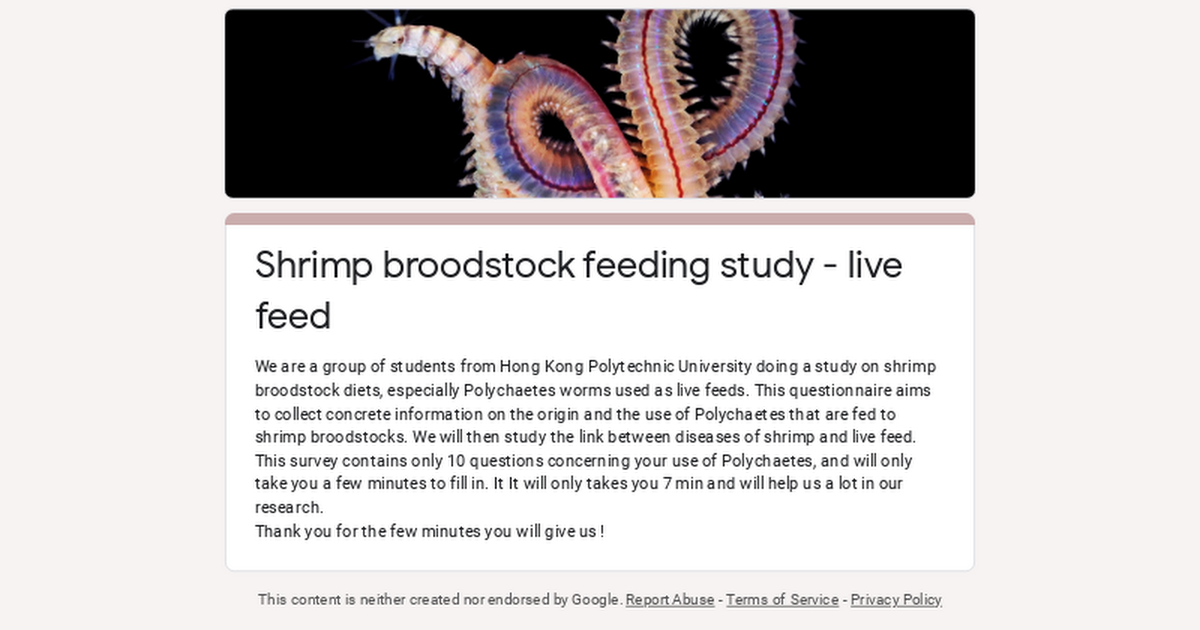 We are a group of students from Hong Kong Polytechnic University doing a study on shrimp broodstock diets, especially Polychaetes worms used as live feeds. This questionnaire aims to collect concre...

The New Shrimp List is created to replace the Yahoo group shrimp list that has been deprecated by Yahoo. This new site will allow anyone interested in the shrimp industry to post, question, search, blog, etc. etc. the new site offers much more flexibility and in time should serve as an extensive knowledge base for anyone who wants to learn more about the shrimp industry.

Signing up is free and simple. you may cancel your membership at any time. All we ask is that you conduct yourself professionally on this professional site.

While it is true that using imported SPF vannamei broodstock demands strict biosecurity maturation management including the use of only imported SPF polychaete… I have used locally obtained indigenous species of polychaete (Eunice philippinensis) for the maturation of wild-caught Penaeus monodon here in the Philippines.

The thing is, unlike other species of commercially produced SPF polychaete species, those ones I used are extracted from the coral reef (not from the mudflat or mangrove) far away from the black tiger prawn hatchery and it is the only hatchery in the area.

With such a bigger polychaete species like the Philippine Marine Bobbit Worm, one can skin this large polychaete like a snake and the entire worm slit open longitudinally along the midline to remove all the gut content and washed thoroughly, where only the CLEAN MEAT is utilized making it safe to feed to the wild-caught prawns… because polychaetes are just incidental mechanical carriers of shrimp viruses e.g. WSSV.

This is called resourcefulness in applied science plus a wee bit of common sense... while "thinking outside the box"